"He is extremely knowledgeable and delightfully enthusiastic, while at the same time making everyone feel included, whatever their level of knowledge"

ACE customer on a previous tour with Kevin Hand

Nestled in the Irish Sea, the Isle of Man boasts a unique accolade: an independent crown dependency, it is the only entirely self-governing territory to have been awarded UNESCO Biosphere Reserve status, reflecting a harmonious relationship between people and nature. Visitors to its shores soon discover why: the island’s remarkable human history, dating back to 6500 BC, has left evocative traces on the landscape alongside some of the most captivating seascapes and clifftops in the world.

Our tour has been carefully designed to reflect this balance between humans and nature. From a base in historical Castletown – the island’s former capital – we will explore several of its most rewarding natural environments. The heather moorland of Dalby Mountain Reserve will introduce us to a wide variety of birdlife including chough, hen harrier, snipe and red grouse; while a rich array of wildlife will greet us at the Ballaugh Curraghs Ramsar wetland, an internationally recognised site of biodiversity. A visit to coastal areas in the south will present some of the best opportunities to see seabirds including kittiwakes, fulmars and black guillemots; and in the north, the stark beauty of the landscape will come alive as we walk along the rare lichen-rich coastal heathland of the Point of Ayre.

Providing a cultural counterpoint to the natural elements, our tour will also touch on the island’s 10,000 year-old social and political history. Founded in the 5th century AD, Maughold parish church is home to several historically important Celtic crosses: the Pillar Cross displays one of the oldest ‘three legs of man’ – or triskelions – on the island.

We will engage further with the island’s past with a visit to Douglas’s Heritage Museum, which touches on more recent WWI and WWII history, and the Leece Museum in Peel, home to a fascinating array of local objects including the last birching stool to be used on the island. Our excursion to this picturesque fishing port will also take us via Tynwald Hill in St John’s, thought to be the oldest continuous parliament site in the world, originally founded by Norse settlers.

We will stay at the historical three-star George Hotel in Castletown, conveniently located for many of our visits.

This tour will be led by Kevin Hand, MSc, MCIEEM, a conservationist and environmental consultant with a special interest in birds, mammals and ecotourism. Kevin has led many projects linking nature and communities, and was a Director of the Tree Council in the UK for 13 years. He has overseen a team providing access to the British countryside for hard to reach groups, and a project on eagles, vultures and other wildlife in Albania. He has also taken on the role of President of the Cambridge Natural History Society. 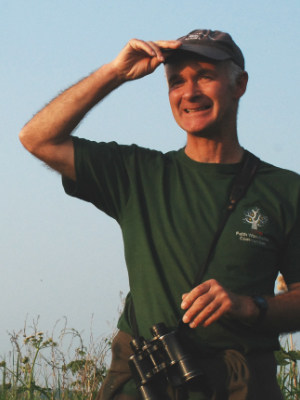 "This is my eighth tour with Kevin - so he must be doing something right! He is extremely knowledgeable and delightfully enthusiastic, while at the same time making everyone feel included, whatever their level of knowledge."

Kevin Hand, MSc, MCIEEM, is a conservationist and environmental consultant with a special interest in birds, mammals and ecotourism. Kevin led a Darwin Initiative project on the taiga forests in Siberia, a project on sustainable forest use in the Ecuadorean Amazon with the Yachana Foundation, and ran National Tree Week in the UK for 13 years. He is President of the Cambridge Natural History Society.

This tour includes several walks, some of up to two and three miles, often over rough terrain. Minibuses or additional walks will sometimes be required to access certain sites. While options will be given for those who would prefer not to do the full walks, participants should have a good level of fitness and be prepared to be flexible. They should also feel comfortable negotiating uneven steps and occasionally dark interiors, and getting in and out of boats during a possible visit to the Calf of Man. Please note facilities on the Calf of Man are very limited.

Tour assembles 1815 at the George Hotel, Castletown, for seven nights. 1830 welcome and introduction to the tour.

Morning walk in and around Castletown including the bay area and Langness Peninsula (Herring Tower, Derby Fort; only UK site for lesser mottled grasshopper). Optional visit to Castle Rushen (one of the best preserved medieval castles in Europe). Afternoon: continue to Scarlett for visits to old lime kilns and quarry (spring squill, flowers).

Morning: visit by boat to Calf of Man (weather permitting) for seabirds and history.  Afternoon: village of Cregneash (a living illustration of a farming and crofting community in the 19th and early 20th centuries). Please note today’s itinerary is weather dependent and might be adjusted to include alternative visits if it is not possible to visit the Calf of Man.

Please note that the below itinerary represents a guide to what we hope to offer, and some elements may be subject to change or reordering nearer the time. Certain visits – including the boat trip to the Calf of Man - are weather permitting, and we cannot guarantee the presence of all the wildlife mentioned.
Days
8
Cost
£1875
Tour Code
ISMN-22
Places are limited.
Please contact the office
for more details.