“The focus of the visits and excursions was in each case excellent. Oliver is an outstanding guide: so knowledgeable and enthusiastic. Everything went extremely well”

“This seat, on an open barren Estate

And inhabited the middle of the XVIIIth Century

By Tho’s Coke Earl of Leicester”

So reads an inscription above the main entrance to the Marble Hall at the heart of the spectacular Palladian mansion of Holkham in North Norfolk. The sweeping landscapes and seascapes of this beautiful part of the county, with their endless vistas and wide skies, were populated in the 17th and 18th centuries by a series of remarkable country houses built for notable patrons of the arts – including Thomas Coke, 1st Earl of Leicester, and Sir Robert Walpole, Britain’s first ‘Prime Minister’.

On this tour, we will enjoy visits to many properties showcasing the work of William Kent, that eminent architect of buildings, landscapes and interiors who pioneered the Palladian style in 18th-century Britain. Raynham Hall, praised as one of Norfolk’s finest country houses, dates from the 17th century but its interiors were redesigned by Kent from 1725. His work is also evident at Holkham and Houghton.

Houghton was built in the 1720s to house Walpole’s great collection of Old Master paintings, later sold to Catherine the Great; the estate is home to the Cholmondeley family who have in recent years commissioned a number of pieces of contemporary sculpture by artists including James Turrell for the 18th-century parkland designed by Charles Bridgeman.

Other highlights of our tour will include visits to two breathtaking Jacobean properties: Blickling Hall, once in the possession of the Boleyn family, and Felbrigg Hall, with its contrasting east and west wings exemplifying the architectural styles of the early and late 17th century respectively.

Meanwhile, the exterior of Wiveton Hall – known as the setting for the BBC observational series Normal for Norfolk – provides an exquisite example of the style archetypal to Norfolk, with its flint facing and Dutch gables, nodding to the county’s historical relationship with the Low Countries.

We will be privileged to enjoy a private visit to Elsing Hall, a Grade I listed moated manor house built around 1740. It is one of the few remaining houses in Norfolk that boasts a traditional great hall open to the rafters, and it is also surrounded by charming gardens. A private home, the hall underwent a renovation project that was awarded Best Renovation by the Norfolk Association of Architects in 2008.

We also hope to visit Sennowe Park, which was built in the Edwardian era for Thomas Albert Cook, grandson of travel and holiday pioneer Thomas Cook, and is still a family home to his descendants.

This tour will take a holistic approach, considering the histories of the owners and families who have shaped these great estates, as well as the architecture, collections and individual works of art. We will also enjoy the opportunity to explore grounds and gardens, which often tell their own important stories. For instance, the renowned architectural designer Kit Martin restored the historical designed landscape at Gunton Park, winning a Country Life ‘Genius of the Place’ Award in 2007.

This tour will be based at the four-star Pheasant Hotel, a relaxing country house hotel close to Holt and Blakeney in the heart of North Norfolk.

This tour will be led by Oliver Gerrish, MSt, an architectural historian who studied at the University of Cambridge. Oliver has written for Country Life, featured in a number of television series on architecture, and organised and led numerous tours to many of Britain’s historical buildings. He is the former Chairman of The Young Georgians, the youth chapter of The Georgian Group, which he re-founded. Oliver is a trustee of the Derbyshire Historic Buildings Trust, and in addition to his architectural expertise is a countertenor and impresario. 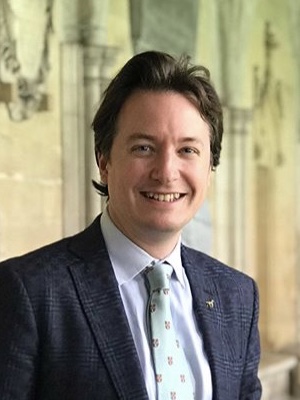 “I would highly recommend this tour… [Oliver Gerrish] was so knowledgeable and was full of information. If there was another Oliver Gerrish tour I would have no hesitation in booking again” - ACE customer on the 2021 Country Houses of North Norfolk tour with Oliver Gerrish

Oliver Gerrish, MSt, is an architectural historian who studied at the University of Cambridge. He is a trustee of the Derbyshire Historic Buildings Trust as well as founder of their Architecture Awards, and is the former Chairman of The Young Georgians, the youth chapter of The Georgian Group, which he re-founded. Oliver has written for Country Life, has appeared in a number of BBC and ITV television series on architecture, and has organised and led numerous tours to many of Britain’s historical buildings. He is also the co-founder of a series of study days on Historic Decoration held at Syon House.

In addition to his architectural expertise, Oliver is also a renowned British countertenor and impresario.

This tour will involve periods of walking and standing within historical properties and their grounds, and participants must be prepared to traverse uneven terrain, steps and staircases, and potentially slippery surfaces. Please note that lifts are not always available at the sites we visit, and light levels are often kept low to conserve the collections. Participants should meet ACE's usual fitness criteria, as outlined in our Booking Terms & Conditions.

Tour disperses after breakfast or approx 1030 at Norwich Station.

Please note that the below itinerary represents a guide to what we hope to offer, and some elements may be subject to change. Due to the special nature of the visits, some may be confirmed nearer the time.
Days
6
Cost
£1875
Tour Code
CHNO-22
Places are limited.
Please contact the office
for more details.