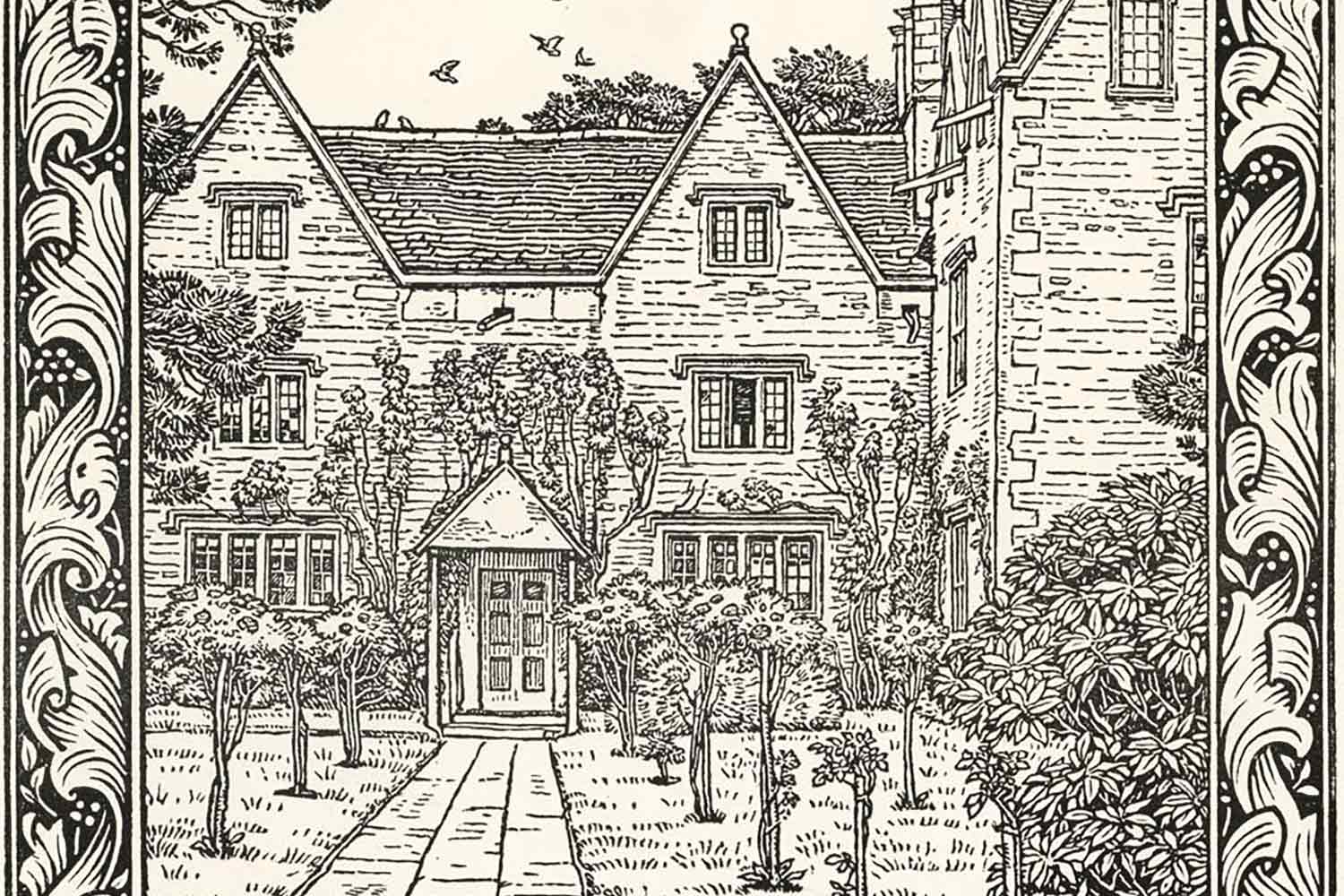 Following extensive conservation works, this spring will see the reopening of Kelmscott Manor, the Cotswolds retreat of artist, poet, novelist and founder of the Arts & Crafts movement, William Morris. ACE looks forward to bringing a group to Kelmscott for a special guided visit, as part of our tour exploring the world of Morris and his Pre-Raphaelite contemporaries in and around Oxford. Here, we introduce this unique place, and explore how it inspired one of England’s greatest Victorian minds.

Sunbeams fall upon golden Cotswolds stone and warm the velvet petals of elegant standard roses, imbuing the air with the evocative and timeless atmosphere of an English country garden in the month of May. Standing on the approach to Kelmscott Manor, one can see why William Morris described it as ‘Heaven on Earth’.

Surrounded by gardens, barns, a meadow, dovecote and stream, this Grade I-listed farmhouse, built around 1600 on the banks of the River Thames, was a source of great inspiration for Morris, who considered it to have almost “grown up out of the soil” – such is its harmonious relationship with the surrounding countryside.

In the summer of 1871, Morris signed a joint lease on the property with the Pre-Raphaelite painter Dante Gabriel Rossetti, intending Kelmscott to be his summer retreat. In line with the philosophy of the Arts & Crafts movement, and his beliefs in the importance of conserving both the built and natural environment, Morris was particularly drawn by the craftsmanship of the building, and its organic, unspoilt nature and relationship to the land.

Inside, Kelmscott features some of Morris’s most famous decorative designs, including items of furniture and his signature textile patterns, attesting to the concept of the interior as a ‘whole work of art’. Works of fine art in the collection include pieces by Rossetti, Edward Burne-Jones as well as the Flemish painter Pieter Brueghel the Younger and the printmaker Albrecht Dürer.

“Some of the objects represent the deeply personal, while others represent the wider Arts & Crafts movement, its partnerships between designers and makers, and the intimate interaction between the residents of the manor and its setting, from garden to wider agricultural landscape”

After Morris’s death, Jane lived on at the house, as did their daughter, May, who later bequeathed it to Oxford University.  An important collection of Morris’s works and possessions remains at Kelmscott, from paintings and textiles, to ceramics and other artefacts, and it was May’s wish that the contents were preserved and visitors granted access to enjoy them.

The University passed the building and its contents on to the Society of Antiquaries in 1962, which has continued to care for them to this day. The manor and gardens are reopening this spring following three years of conservation, made possible by the National Lottery Heritage Fund.

This major project has involved the restoration of original decorative schemes, following detailed research undertaken upon the historical interiors. For example, Morris’s ‘Fruit’ wallpaper design, which hung in Jane Morris’s bedroom, has been recreated using the original blocks. A new interpretation plan will revive the way in which visitors encounter and learn about Kelmscott, its contents and history.

ACE looks forward to being amongst the first groups to visit the newly opened site this spring, with a special visit to Kelmscott Manor featuring on our tour exploring ‘William Morris & the Pre-Raphaelites in Oxford’ from May 23-26, 2022, led by Tour Director Christopher Bourne. The group will enjoy a guided tour of the house, followed by lunch in the tearoom and an opportunity to see the gardens, as well as a visit to the churchyard in Kelmscott to view Morris’s grave.

Other visits on our tour include Buscot Park, with its collection of Pre-Raphaelite paintings including the wonderful Briar Rose series by Burne-Jones; the 13th century barn at Great Coxwell, described by Morris as “unapproachable in its dignity”; and a series of special visits to colleges and chapels in Oxford itself – from Keble, home to William Holman Hunt’s The Light of the World, to Harris Manchester, with its rich stained glass.