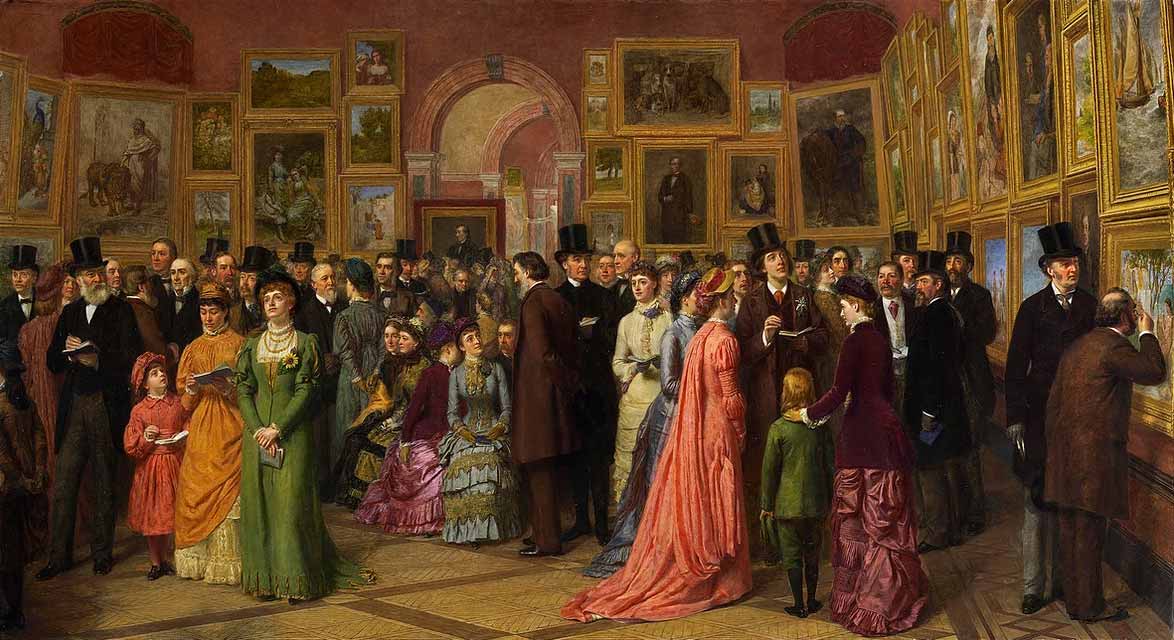 In this latest ACE Story, we explore art history from a slightly different angle, looking at methods of displaying historical works of art in the 18th and 19th centuries, and how this was in part impacted by their materiality.

In the 18th century, many landowners up and down Britain began building and remodelling grand country houses, often in the fashionable new Palladian style, and with the express intention of creating a space to house and display the extensive collections of art they were amassing. For example, Kedleston Hall in Derbyshire, designed by the influential architect Robert Adam, was envisaged from the outset as a ‘temple of the arts’ for its owner, Nathaniel Curzon. The establishment of the European Grand Tour as part of every young aristocrat’s cultural education resulted in a great number of Old Master paintings and antique sculptures coming into Britain, and suitable spaces were deemed to be required to for their new owners to show them off to their full potential.

Many Grand Tourists focused their time in Italy, and Old Master paintings of the Italian School were considered some of the most fashionable works of art amongst 18th century collectors. They often took the form of history paintings, allegories or Biblical scenes. Even for those who did not travel abroad to buy art, works from this school could be acquired either through the use of an agent or dealer on the continent, or at auction in Britain.

But how to display these paintings in the context of the country house? Often paintings remained in the carved and gilded frames that had encased them for many years. Original frames, or those which evoked a previous collection in which the painting had been held (for example, by featuring monograms), conferred a sense of prestige upon their new owners by reminding viewers of the artwork’s illustrious provenance. Occasionally, country house owners reframed works acquired on the secondary market in a ‘house frame’, a set of which in the stately home interior lent a sense of continuity to the art collection and emphasised the stature of the new owner – but this was more often considered appropriate for new commissions, and family portraits.

One key principle that guided collectors and architects looking to display Old Masters was that the setting ought to complement the paintings, and this was often achieved through the lining of the walls of country house picture galleries in green or red silk damask hangings. These colours were thought to particularly complement Old Master oil paintings due to the pigments that were used in their creation, and the red-ground gesso bases of the pictures.

This style can be seen in many country houses, such as at Houghton Hall in Norfolk, which was designed by the architect William Kent in the 1720s for Sir Robert Walpole, Britain’s first Prime Minister, and is today considered one of the country’s finest Palladian houses. Walpole amassed an extensive collection of European art to hang at Houghton, although this was later sold to Catherine the Great and is now in the Hermitage in St Petersburg. Amongst the state rooms is the Red Saloon, a room hung in ruby velvet, which today houses a collection of family portraits, but once would have contained these Old Masters.

“We would like to replace the family portraits in the Red Saloon with a denser hang of subject paintings, as in Sir Robert Walpole’s time (and again briefly in 2013 when we borrowed back part of his collection from the Hermitage for our first exhibition, ‘Houghton Revisited’). With the wall hangings of original crimson velvet, and William Kent’s gilded side tables and magnificent painted ceiling depicting Apollo driving his chariot, the room should once again take on the character of a Roman salone, as was surely the intention"

- David & Rose Cholmondeley, the Marquess & Marchioness of Cholmondeley and owners of Houghton Hall, writing of their future hopes for the interiors in Apollo Magazine, June 2020 - ‘Home Alone at Houghton: Life in Lockdown at One of England’s Great Houses’

Another notable example of the use of sumptuous wall hangings as a backdrop for art in the 18th century is at Longford Castle in Wiltshire. This Elizabethan castle was purchased by the Bouverie family in 1717, and its interiors redecorated in line with Georgian taste by the owners, who were simultaneously amassing a great collection of art, including works by Claude and Poussin. The picture gallery at Longford was hung in green silk damask, complemented by a matching suite of bespoke furniture.

“The Apartments are very elegant, and the Furniture and Decorations shew [sic] an excellent Taste"

- A visitor to Longford Castle in 1762, remarking upon the interior decoration of the picture gallery

In the early 19th century, Longford was, for a time, home to Holbein’s famous painting The Ambassadors – now in the collection of the National Gallery in London – and the green wall hangings depicted in the background of this most unusual of portraits must have chimed beautifully with the real green silk hangings on the wall behind it.

A way in which country house owners displayed another type of art to its full effect was to gather smaller paintings in what were known as ‘cabinet rooms’. Often located adjacent to a picture gallery, these were intended to offer opportunities for more intimate and close-up encounters with smaller-scale and more highly detailed works of art, such as those by the Northern schools. A flower piece painted by Jan Breughel the Elder on copper at Longford Castle, for example, has since the 18th century been displayed in a small lobby off the main picture gallery, where viewers can engage closely with its luminous materiality.

These types of interior decoration continued to be influential into the 19th century, impacting the design of new public art museums. The National Gallery was formed in 1824, around the collection of paintings amassed by banker John Julius Angerstein, and initially was displayed at his house in Pall Mall. But the nation’s art collection soon required a new home, and when the Trafalgar Square site was developed, many of the rooms followed similar decorative principles to those employed in the context of the country house over the course of the previous century.

Room 9 at the National Gallery

For example, the Wohl Room in the National Gallery – which displays paintings by Venetian artists such as Titian, Tintoretto and Veronese – is lined with green damask wall hangings. Other rooms in the gallery are decorated in similarly rich and opulent hues, although the walls of some rooms are painted rather than hung with fabric. The Ambassadors has been hung against walls painted in an intense dark aubergine, which equally complements the colours of the artwork, enabling the green backdrop of the painting to glow with vibrancy.

It is also notable that the National Gallery contains some smaller ‘cabinet rooms’, wherein works by the Dutch and Flemish schools are housed, in line with past traditions for viewing this type of art.

During the 20th century, in response to the development of the Modern art movement, a new aesthetic of gallery design emerged: that of the White Cube. Artists from movements such as the Bauhaus preferred that their work was freed of the distractions of a traditional gallery background. However, the historical means of displaying works by the Old Masters – from rich damask wall hangings to opulent gold frames – endures to the present day, and can still be seen in situ in many of Britain’s magnificent country houses.